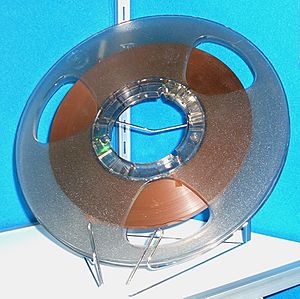 A master recording is the first recording of a song or other sound, from which all the later copies are made. Master recordings (usually called just "masters") can be made on discs, tapes, and computer data storage formats.

A multitrack master is an original multitrack recording, which may be worked on over time. This may have four, eight, sixteen or more tracks. Such a recording cannot be played on an ordinary machine, and needs a special machine to be played or recorded.

Multitrack recordings are mixed when they are finished, into a mono (monaural), stereo, or Surround Sound recording. This is called a "mixed master". Copies of the mixed master can be played on an ordinary machine.

Master recordings often become valuable, especially if the recording artist is popular. Most masters are owned by record companies, but many artists and bands own their own master recordings, or are able to buy them later.

Recordings are sometimes remastered, to copy them to another format, or to make them sound better. Digital recording allows for older analog recordings to be "cleaned up", and preserved.

All content from Kiddle encyclopedia articles (including the article images and facts) can be freely used under Attribution-ShareAlike license, unless stated otherwise. Cite this article:
Master recording Facts for Kids. Kiddle Encyclopedia.