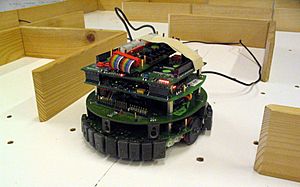 Robot in a wooden maze

There are a number of different maze solving algorithms, that is, automated methods for the solving of mazes. The random mouse, wall follower, Pledge, and Trémaux's algorithms are designed to be used inside the maze by a traveler with no prior knowledge of the maze, whereas the dead-end filling and shortest path algorithms are designed to be used by a person or computer program that can see the whole maze at once.

Mazes containing no loops are known as "simply connected", or "perfect" mazes, and are equivalent to a tree in graph theory. Thus many maze solving algorithms are closely related to graph theory. Intuitively, if one pulled and stretched out the paths in the maze in the proper way, the result could be made to resemble a tree.

This is a trivial method that can be implemented by a very unintelligent robot or perhaps a mouse. It is simply to proceed following the current passage until a junction is reached, and then to make a random decision about the next direction to follow. Although such a method would always eventually find the right solution, this algorithm can be extremely slow.

The best-known rule for traversing mazes is the wall follower, also known as either the left-hand rule or the right-hand rule. If the maze is simply connected, that is, all its walls are connected together or to the maze's outer boundary, then by keeping one hand in contact with one wall of the maze the solver is guaranteed not to get lost and will reach a different exit if there is one; otherwise, the algorithm will return to the entrance having traversed every corridor next to that connected section of walls at least once. The algorithm is a depth-first in-order tree traversal.

Another perspective into why wall following works is topological. If the walls are connected, then they may be deformed into a loop or circle. Then wall following reduces to walking around a circle from start to finish. To further this idea, notice that by grouping together connected components of the maze walls, the boundaries between these are precisely the solutions, even if there is more than one solution (see figures on the right).

Another concern is that care should be taken to begin wall-following at the entrance to the maze. If the maze is not simply-connected and one begins wall-following at an arbitrary point inside the maze, one could find themselves trapped along a separate wall that loops around on itself and containing no entrances or exits. Should it be the case that wall-following begins late, attempt to mark the position in which wall-following began. Because wall-following will always lead you back to where you started, if you come across your starting point a second time, you can conclude the maze is not simply-connected, and you should switch to an alternative wall not yet followed. See the Pledge Algorithm, below, for an alternative methodology.

Disjoint mazes can be solved with the wall follower method, so long as the entrance and exit to the maze are on the outer walls of the maze. If however, the solver starts inside the maze, it might be on a section disjoint from the exit, and wall followers will continually go around their ring. The Pledge algorithm (named after Jon Pledge of Exeter) can solve this problem.

The Pledge algorithm, designed to circumvent obstacles, requires an arbitrarily chosen direction to go toward, which will be preferential. When an obstacle is met, one hand (say the right hand) is kept along the obstacle while the angles turned are counted (clockwise turn is positive, counter-clockwise turn is negative). When the solver is facing the original preferential direction again, and the angular sum of the turns made is 0, the solver leaves the obstacle and continues moving in its original direction.

The hand is removed from the wall only when both "sum of turns made" and "current heading" are at zero. This allows the algorithm to avoid traps shaped like an upper case letter "G". Assuming the algorithm turns left at the first wall, one gets turned around a full 360 degrees by the walls. An algorithm that only keeps track of "current heading" leads into an infinite loop as it leaves the lower rightmost wall heading left and runs into the curved section on the left hand side again. The Pledge algorithm does not leave the rightmost wall due to the "sum of turns made" not being zero at that point (note 360 degrees is not equal to 0 degrees). It follows the wall all the way around, finally leaving it heading left outside and just underneath the letter shape.

This algorithm allows a person with a compass to find their way from any point inside to an outer exit of any finite two-dimensional maze, regardless of the initial position of the solver. However, this algorithm will not work in doing the reverse, namely finding the way from an entrance on the outside of a maze to some end goal within it.

Trémaux's algorithm. The large green dot shows the current position, the small blue dots show single marks on paths, and the red crosses show double marks. Once the exit is found, the route is traced through the singly-marked paths.

Trémaux's algorithm, invented by Charles Pierre Trémaux, is an efficient method to find the way out of a maze that requires drawing lines on the floor to mark a path, and is guaranteed to work for all mazes that have well-defined passages, but it is not guaranteed to find the shortest route.

A path from a junction is either unvisited, marked once or marked twice. The algorithm works according to the following rules:

The "turn around and return" rule effectively transforms any maze with loops into a simply connected one; whenever we find a path that would close a loop, we treat it as a dead end and return. Without this rule, it is possible to cut off one's access to still-unexplored parts of a maze if, instead of turning back, we arbitrarily follow another path.

When you finally reach the solution, paths marked exactly once will indicate a way back to the start. If there is no exit, this method will take you back to the start where all paths are marked twice. In this case each path is walked down exactly twice, once in each direction. The resulting walk is called a bidirectional double-tracing.

Essentially, this algorithm, which was discovered in the 19th century, has been used about a hundred years later as depth-first search.

Dead-end filling is an algorithm for solving mazes that fills all dead ends, leaving only the correct ways unfilled. It can be used for solving mazes on paper or with a computer program, but it is not useful to a person inside an unknown maze since this method looks at the entire maze at once. The method is to 1) find all of the dead-ends in the maze, and then 2) "fill in" the path from each dead-end until the first junction is met. Note that some passages won't become parts of dead end passages until other dead ends are removed first. A video of dead-end filling in action can be seen here: [1][2].

Dead-end filling cannot accidentally "cut off" the start from the finish since each step of the process preserves the topology of the maze. Furthermore, the process won't stop "too soon" since the end result cannot contain any dead-ends. Thus if dead-end filling is done on a perfect maze (maze with no loops), then only the solution will remain. If it is done on a partially braid maze (maze with some loops), then every possible solution will remain but nothing more. [3]

This is in effect a depth-first search expressed in term of grid points. The omniscient view prevents entering loops by memoization. Here is a sample code in Java:

Maze-routing algorithm uses the notion of Manhattan distance (MD) and relies on the property of grids that the MD increments/decrements exactly by 1 when moving from one location to any 4 neighboring locations. Here is the pseudocode without the capability to detect unreachable locations. 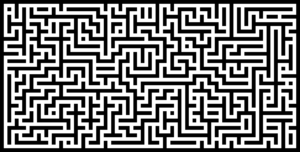 A maze with many solutions and no dead-ends, where it may be useful to find the shortest path

All content from Kiddle encyclopedia articles (including the article images and facts) can be freely used under Attribution-ShareAlike license, unless stated otherwise. Cite this article:
Maze solving algorithm Facts for Kids. Kiddle Encyclopedia.