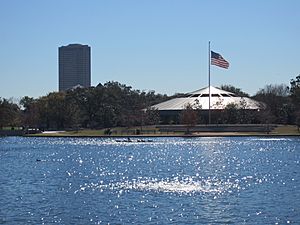 The lake has been described as "the sparkling jewel that anchors the park and its surrounding attractions". It has three islands, two of which are designated for migratory birds. Visitors can fish at Bob's Fishing Pier or ride pedal boats.

The lake was expanded and restored during 1999–2001, and was reopened by Mayor Lee Brown in April 2001. The project cost $4 million. The Texas Parks and Wildlife Department restocked the lake, and fishing permits started being issued again in 2002. Species include bass and bluegill.

All content from Kiddle encyclopedia articles (including the article images and facts) can be freely used under Attribution-ShareAlike license, unless stated otherwise. Cite this article:
McGovern Lake Facts for Kids. Kiddle Encyclopedia.