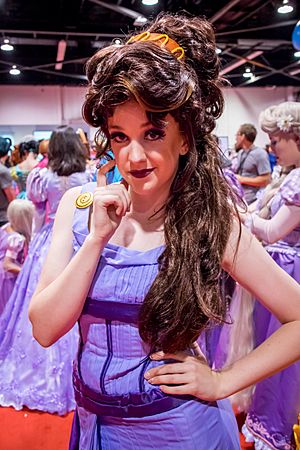 A cosplayer dressed up as Megara.

Megara is a character from Disney's Hercules. She is voiced by Susan Egan.

Megara was captured by Nessus and was rescued by Hercules. She doesn't like being known as the damsel in distress. She made a deal with Hades.

All content from Kiddle encyclopedia articles (including the article images and facts) can be freely used under Attribution-ShareAlike license, unless stated otherwise. Cite this article:
Megara (Disney) Facts for Kids. Kiddle Encyclopedia.