This is a list of the works of Mercer Mayer.

The following is a partial list of books that Mercer Mayer has written and/or illustrated. It also includes books and items that are related to Mercer Mayer and his creations (like coloring books, sticker books, lacing cards, toys, etc.). 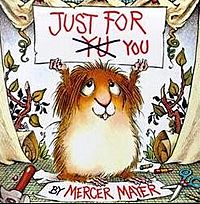 Little Critter is an anthropomorphic character created by Mercer Mayer. Although it's not specified what species the Little Critter is, many have speculated him to be a groundhog, guinea pig, hamster, wombat or porcupine. Little Critter first appeared in the 1975 book Just for You. This book is sometimes mistitled Just for Yu because of the childlike mistake on the front cover (see picture).

Continuation of the main series with HarperFestival
same dimensions, may contain some stickers, or other items.

A numbered series. These were re-released by Scholastic and as a part of Mercer Mayer's Little Critter Book Club

These were initially published by Scholastic publishing as accordion-style fold-out board books.
Most were republished by Random House and Green Frog as regular hardcover and softcover books.

Published by multiple publishing houses. Some were originally released as hardcovers and then later re-released as Chunky Flap Board Books (two ISBN numbers are listed when this is the case).

By Spectrum & Brighter Child (for Homeschool) (Starting in 2001, Spectrum and Brighter Child launched a series of Little Critter workbooks for kindergarten through 2nd grade age levels.)

Critters of the Night

AKA Creepy Critters, all written by Erica Farber and J. R. Sansevere (illustrated by Mercer Mayer)

All written by Erica Farber and J. R. Sansevere (illustrated by Mercer Mayer) 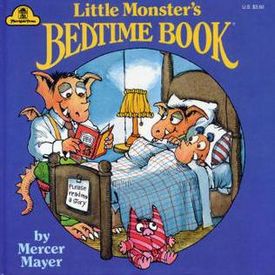 Creatures in the Professor Wormbog series tend to also appear in the Little Monster series of books.

Books that feature characters that also appear in the Little Monster and Professor Wormbog series.

A series of 6 wordless books. These have been re-released in many formats, but they are usually smaller in size.

AKA A Tiny Tink! Tonk! Tale series published by Bantam Books. Also see the Mercer Mayer Computer Software section for the video game titles related to this series that were developed by Mercer Mayer.

A series of virtually wordless books featuring a male and a female anthropomorphic hippopotamus or elephant and the word that is in the title.

Both books in this series are written by Mercer Mayer, but illustrated by Steven Kellogg:

Illustrations for other authors' books

Most of these are from Disneyland Records and Little Golden Books (usually labeled as a "Little Golden Book & Cassette" or "Little Golden Book & Record"). These are books that came with a word for word audio recording on record (speed = 331⁄3, size = 7") or cassette tape of someone reading the story. They usually included music, sound effects, and original songs too. Sometimes the cassettes were labeled "Record your own story" on the B-side (with the original recording on the A-side). "SEE the pictures HEAR the record READ the book", was a catch phrase that was written on most of these books.

Audio CDs that are available on Mercer Mayer's official site.

These songs are either mentioned on the official Mercer Mayer website or featured on it, but are not currently available otherwise.

The Tink! Tonk! series of games were educational and action video game style.

This is a list of Critter Kids books with dates originally scheduled for late 2006 but they have yet to be released:

All content from Kiddle encyclopedia articles (including the article images and facts) can be freely used under Attribution-ShareAlike license, unless stated otherwise. Cite this article:
Mercer Mayer bibliography Facts for Kids. Kiddle Encyclopedia.