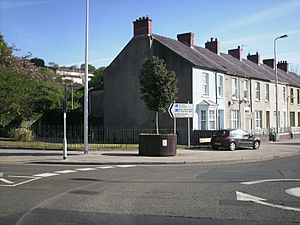 Site of Merlin's Oak with a replacement tree growing in 2011

Merlin's Oak, also known as the Old Oak, is an oak tree that once stood on the corner of Oak Lane and Priory Street in Carmarthen, South Wales. Merlin's Oak is associated with the legend of Merlin in the local lore, but it was probably planted by a schoolmaster in 1659 or 1660, to celebrate the return of King Charles II of England to the throne. Legend had it that if the oak fell, disaster would befall the town.

In the early 19th century, a local man appears to have poisoned the tree, with the intention of stopping people from meeting under it, and the oak is believed to have died in 1856. In 1951, a branch was broken off the dead tree; this fragment can still be seen in Carmarthenshire County Museum. In 1978, the last fragment of the tree's stump was removed from its original place, and is now displayed in Saint Peter's Civic Hall in Nott Square, Carmarthen. A replacement tree was planted at the same site in 2009.

All content from Kiddle encyclopedia articles (including the article images and facts) can be freely used under Attribution-ShareAlike license, unless stated otherwise. Cite this article:
Merlin's Oak Facts for Kids. Kiddle Encyclopedia.