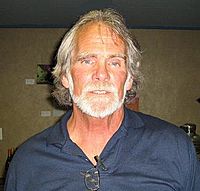 Michael Shea (1946 – February 16, 2014) was an American writer. His genres included fantasy, horror, and science fiction. He has won "year's best" World Fantasy Awards for the novel Nifft the Lean and the novella Growlimb. He was born in Culver City, California.

Michael Shea died unexpectedly on February 16, 2014. He was 67 years old. He was outlived by his wife and two children.

All content from Kiddle encyclopedia articles (including the article images and facts) can be freely used under Attribution-ShareAlike license, unless stated otherwise. Cite this article:
Michael Shea (writer) Facts for Kids. Kiddle Encyclopedia.