The Riding Coliseum, Dairy Cattle Building, and Agricultural Building were likely designed by the same architect, Lynn W. Fry of the State Building Department. The three buildings were constructed in two year intervals in 1922, 1924, and 1926.

The Michigan State Fair was held on this site until 2008. It was not held the following two years, and then moved to another location. On April 9, 2012, Governor Rick Snyder signed Senate Bill 515 and House Bill 4803, which would authorize the transfer of the fairgrounds land to the Land Bank Fast Track Authority, which would oversee the land for future development, including plans for a station for the proposed commuter rail service. As of 2016, plans are underway for redevelopment of the entire site, including these buildings.

In 2020, the state fairgrounds were sold to Amazon; the company plans to convert the site into a $400 million distributaion center. As of this date, it is planned that the buildings on the site will be demolished.

The Dairy Cattle Building, the Coliseum, and the Agricultural Building are located near each other together in the center of the State Fairgrounds. All three are similar in appearance, being Neo-Classical Revival, white stuccoed buildings sitting on high red brick foundations. They are fine examples of the Classically inspired exhibition architecture popularized by the World Fair exhibitions of the nineteenth and twentieth centuries. 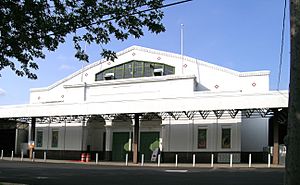 The Agriculture Building, built in 1926, is a long one-story structure with a tall curved roof, the gable end of which is concealed behind a stuccoed parapet on the front facade. It has two entrances, one each on the front and side, which are sheltered by projecting arcades with a denticulated cornice. The walls are separated into shallow panels. The interior houses only a single large utilitarian space. 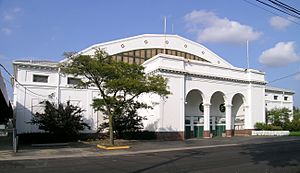 The Coliseum, constructed in 1922, is similar in general design to the Agricultural Building, with paneled stucco walls, projecting arcades, and a denticulated cornice. The building footprint is 420 feet by 225 feet, and it contains a 264 feet by 124 feet riding arena encircled with a seating area. The Coliseum is constructed with an unusual "rain-bo" steel truss roof, which is one of the largest trussed structures in the Detroit area. 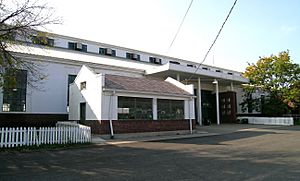 The Dairy Cattle Building, built in 1924, is constructed as a rear extension to the Coliseum, and is similar to the other two buildings. It is a monitor-roofed, basilican-plan building with a modern brick-and-steel entrance constructed in the 1950s on one side. Like the Agricultural Building, the interior consists only of a single large space.