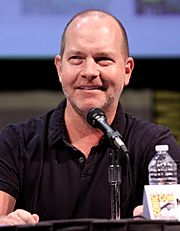 He does the voice for many characters, such as Cleveland Brown, Herbert, Bruce, and Greased Up Deaf Guy, and Consuela. Starting with the show's fifth season, Henry had received billing as a main cast member. In 2009, Henry, Seth MacFarlane, and Richard Appel created a spin-off of Family Guy called The Cleveland Show to focus on Cleveland and his new family.

Henry is currently married to Sara Henry and have two children.

All content from Kiddle encyclopedia articles (including the article images and facts) can be freely used under Attribution-ShareAlike license, unless stated otherwise. Cite this article:
Mike Henry Facts for Kids. Kiddle Encyclopedia.