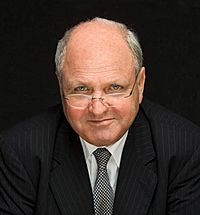 Michael Kenneth Moore ONZ AO PC (28 January 1949 – 2 February 2020) was a New Zealand politician, union organiser and author. He was a member of the Labour Party. In 1990, he notably served as Minister of Foreign Affairs, and was Prime Minister for 59 days. Following Labour's defeat in the 1990 election, Moore served as Leader of the Opposition until the 1993 election. He served as director-general of the World Trade Organization from 1999 to 2002. He also held the post of New Zealand's ambassador to the United States from 2010 to 2015.

Moore was born in Whakatane. He was married to Yvonne Dereany. He died on 2 February 2020 in Auckland, at the age of 71.

All content from Kiddle encyclopedia articles (including the article images and facts) can be freely used under Attribution-ShareAlike license, unless stated otherwise. Cite this article:
Mike Moore Facts for Kids. Kiddle Encyclopedia.