Kids Encyclopedia Facts
Not to be confused with Mills House No. 1. 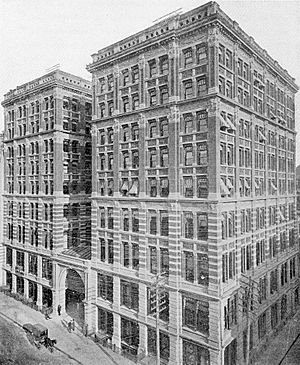 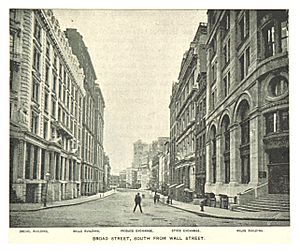 Broad Street in 1893. Mills Bldg is second on left

The Mills Building was a 10-story structure that stood at 15 Broad Street and Exchange Place in Manhattan, with an L-shaped extension to 35 Wall Street. It wrapped around the J. P. Morgan & Company Building at 23 Wall Street, on the corner of Broad and Wall Streets. George B. Post was the architect of the edifice.

The Mills Building was completed in 1882. Wooden piles were driven down to support the edifice until it was found that it was too heavy for its foundation work. It rested on sandy soil, and the structure began to settle. Additional supports were driven down after a means of doing this was discovered. This was performed without the building having to be torn down. Finally a secure foundation was accomplished, although it was different from one composed of bedrock. In the future, this would be achieved by employing caisson foundations.

In 1908, there were plans to replace the Mills Building with a 1,000-foot-tall (300 m) skyscraper, which would be the world's tallest building.

All content from Kiddle encyclopedia articles (including the article images and facts) can be freely used under Attribution-ShareAlike license, unless stated otherwise. Cite this article:
Mills Building (New York City) Facts for Kids. Kiddle Encyclopedia.