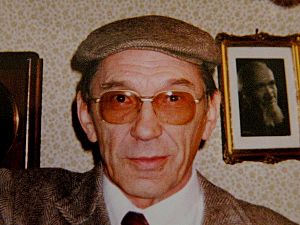 Miloš Mikeln (23 May 1930 – 2 April 2014) was a Slovenian journalist, playwright, theatre director and writer. He was president of Slovene PEN and was the pobudnik of the Writers for Peace Committee, founded in 1984. He was also a member of the Slovene Writers' Association. His best known works were Veliki voz (1992), Poročnik z Vipote (2002) and Mesto ob reki (2008).

Mikeln was born in Celje, Kingdom of Yugoslavia (now in Slovenia). He studied at the University of Ljubljana.

Mikeln died from natural causes on 2 April 2014 in Ljubljana. She was 83 years old.

All content from Kiddle encyclopedia articles (including the article images and facts) can be freely used under Attribution-ShareAlike license, unless stated otherwise. Cite this article:
Miloš Mikeln Facts for Kids. Kiddle Encyclopedia.