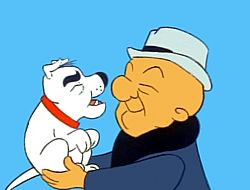 Mr. Quincy Magoo is a popular cartoon character from the late 1940s until the 1970s. Jim Backus was the voice of Mr. Magoo. Mr. Magoo was not able to see well because he was very farsighted.

The first cartoon with Mr. Magoo was The Ragtime Bear (1949).

All content from Kiddle encyclopedia articles (including the article images and facts) can be freely used under Attribution-ShareAlike license, unless stated otherwise. Cite this article:
Mr. Magoo Facts for Kids. Kiddle Encyclopedia.