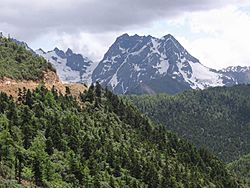 Mixed forests are a temperate and humid biome. The forests have four layers. The uppermost layer is the forest canopy of tall, mature trees from 33 to 66 m (100 to 200 feet) high.

Below the canopy is the three-layered understory, about 9 to 15 m (30 to 50 feet) shorter than the canopy. The top layer of the understory has smaller mature trees, saplings. There are also suppressed juvenile canopy layer trees waiting for an opening in the canopy. Below the sub-canopy is the shrub layer of low-growing woody plants. Most of the time, the lowest growing (and most diverse) layer is the ground cover or herbaceous layer.

All content from Kiddle encyclopedia articles (including the article images and facts) can be freely used under Attribution-ShareAlike license, unless stated otherwise. Cite this article:
Mixed forest Facts for Kids. Kiddle Encyclopedia.