Miya's is a restaurant in New Haven, Connecticut, United States, credited as the first sustainable sushi restaurant in the world. The restaurant was founded by Yoshiko Lai, a Japanese nutritionist. They are slated to close at the end of 2020.

In 1982, Miya's was the first sushi restaurant in Connecticut, specializing in Kyushi-style recipes. With the creation of the sweet potato roll in 1995, Miya's began to create a plant-based sushi menu. By the late 1990s, 80% of the sushi menu had been converted into a plant-based one, and traditional sweetened white rice was replaced with a whole grain brown rice-based blend. In 2005, Miya's introduced its first invasive species menu, featuring locally caught invasive species such as Asian shore crabs and European green crabs. 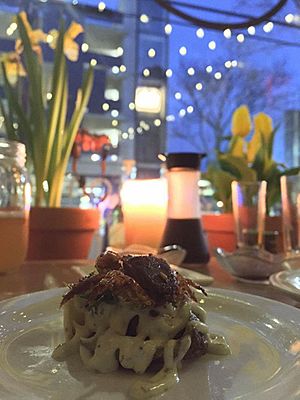 All content from Kiddle encyclopedia articles (including the article images and facts) can be freely used under Attribution-ShareAlike license, unless stated otherwise. Cite this article:
Miya's Facts for Kids. Kiddle Encyclopedia.