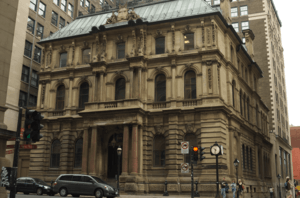 The Molson Bank Building was built at the corner of St. Peter and St. James streets (now rue Saint-Pierre and rue Saint-Jacques) in Old Montreal as the headquarters of the Molson Bank in 1866 by order of founder William Molson (1793-1875). It was the first building in Montreal to be built in the Second Empire style, designed by George Browne working with his son John James George Browne.

The bank later merged with Bank of Montreal in 1925.

All content from Kiddle encyclopedia articles (including the article images and facts) can be freely used under Attribution-ShareAlike license, unless stated otherwise. Cite this article:
Molson Bank Building, Montreal Facts for Kids. Kiddle Encyclopedia.