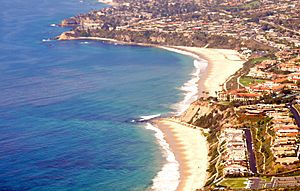 Monarch Beach is named after its most prominent geological feature "Monarch Bay" aptly named as its rolling hills of sagebrush and manzanita were once a breeding ground for the monarch butterfly. The butterflies were once seen there in large masses, but have disappeared from the area because their habitat has been replaced, almost entirely, by the large houses that can be found in the Monarch Beach neighborhood.

Like the rest of Dana Point, Monarch Beach residents enjoy close proximity to the beach, a relatively low-crime rate, top-rated competitive public schools, and a relaxed, comfortable and athletic atmosphere that proliferates within the entire Dana Point community. They are also close to the Dana Point Harbor and the nearby shopping center. The Links — an 18-hole golf course designed by Robert Trent Jones, Jr. — is considered one of the best golf courses in Southern California. In addition, the Monarch Beach Resort & Links Course offers visitors some of the best amenities in the area. Monarch Beach is about a five-minute walk to Salt Creek Beach. It has straight access to Strand Beach and a picnic area.

Historically, Monarch Beach was a part of Laguna Niguel unincorporated county area. The group responsible for incorporation of Dana Point submitted documents on December 31, 1986, a week behind Laguna Niguel's submission. At a Local Agency Formation Commission (LAFCO) meeting in May 1987, commissioners outraged Laguna Niguel by proposing the coastal subdivisions of Monarch Beach be a part of Dana Point. This was based on a poll of residents in the area, which showed approximately 90 percent wanting to be a part of Dana Point. The commission suggested the matter be put to a vote in November, but the idea was opposed by some. An advisory vote took place in November 1987, with 63 percent of the residents voting, 61 percent chose to go with the city of Dana Point. In December, LAFCO voted to include the disputed coastal strip to Dana Point, without Laguna Niguel present which again caused uproar, and scheduled the cityhood vote for June 1988. Under protest by Laguna Niguel, the commission voted to reconsider their decision, and scheduled a new hearing in January 1988 and LAFCO voted to place the coveted coastal strip with Dana Point. The incorporation vote for Dana Point occurred on June 7, 1988 and it became the 28th city in Orange County on January 1, 1989. Incorporation won by a 4-1 margin, which took 13 public hearings and two elections to produce. But the fight was not over. Laguna Niguel filed suit to set aside the decision and laid claim to Sea Terrace Park by means of a developer agreement. In October, a judge decided Dana Point would keep the Monarch Beach coastal strip.

The Nixon Interviews with David Frost were conducted in a Monarch Beach home in the spring of 1977.

All content from Kiddle encyclopedia articles (including the article images and facts) can be freely used under Attribution-ShareAlike license, unless stated otherwise. Cite this article:
Monarch Beach, Dana Point, California Facts for Kids. Kiddle Encyclopedia.