Montezooma's Revenge is a shuttle roller coaster located at Knott's Berry Farm in Buena Park, California. It opened on May 21, 1978. Designed by Anton Schwarzkopf, it is one of eight flywheel-launched units manufactured for theme parks around the world. It was the first flywheel-launched roller coaster in the world, the oldest shuttle loop roller coaster still in its original location, and it is the last ride of its kind still operating in the United States.

Unlike many other looping coasters, Montezooma's Revenge uses conventional lap bars to hold riders in the seats instead of modern over-the-shoulder restraints found on most other steel looping roller coasters. Following Cedar Fair LP's 1997 takeover of Knott's Berry Farm, fabric seat belts were added as a secondary restraint system. 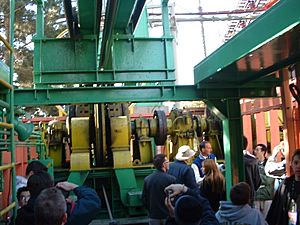 Montezooma's Revenge was named after the bluegrass group, Montezuma's Revenge, a musical act that performed regularly in the wagon camp at Knott's Berry Farm. Based on the launch mechanism for aircraft carriers, the flywheel-launched shuttle loop is a successor of the drop-tower launch shuttle, and predates modern LIM and hydraulic launch systems by over 15 years. The drop tower models had a large silo with a weight inside connected to a similar launch system. The weight would drop, thus pulling the cable and bob, launching the train. Drawbacks included no adjustments for inclement weather. Also, the drop-tower launch was nowhere as intense as the flywheel launch, taking almost two seconds longer to reach the same speed.

In 2017, Montezooma's Revenge was painted with orange track and dark green supports.

On June 20, 2019, Montezooma's Revenge was designated as a Roller Coaster Landmark by the American Coaster Enthusiasts, officially recognizing the ride as the last coaster of its kind in the United States and the longest standing in its original location.

The ride uses a flywheel mechanism to accelerate the train to 55 miles per hour (89 km/h) in 4.5 seconds. The train goes through a vertical loop, then ascends a spike and reverses direction. It passes through the station in reverse and ascends another spike behind the station.

The 7.6 tonnes (7.5 long tons; 8.4 short tons) flywheel, located outside the station and adjacent to the loop, is attached to a clutch and cable system, which in turn connects to a small four-wheeled catch car known as a "bob". On the front of the bob is a launch pin that seats in a socket in the back of the train. Once the bob is seated, the operators receive the ready light.

Two operators are required to launch the train. After verifying that all passengers have secured their restraints and checking the exit stairs, one operator ascends a podium at the right front of the train. The other operator stands on a platform at the left rear. After verifying that the launch area is clear of personnel, the front operator gives a thumbs-up signal and says, "Clear dispatch." Both operators must then press a button on their respective consoles simultaneously to launch.

At launch, the clutch system engages the cable to the spinning flywheel, pulling the bob and train rapidly forwards. During the launch sequence, enough kinetic energy is removed from the flywheel to reduce its speed from approximately 1044 rpm to 872 rpm. The train negotiates a 76-foot (23 m) diameter vertical loop before ascending the 148-foot (45 m) front spike, then descends backwards, going through the loop a second time, running at full speed backwards through the station, and ascending the 112-foot (34 m) rear spike. It is at this point where the best "airtime" on the ride is experienced. The train then returns to its starting position after being slowed by 66 sets of brakes, 33 in the station and 33 to the rear of the station.

In June 2019, Montezooma's Revenge was given the Coaster Landmark Award by the American Coaster Enthusiasts club. There is a plaque commemorating the achievement.

All content from Kiddle encyclopedia articles (including the article images and facts) can be freely used under Attribution-ShareAlike license, unless stated otherwise. Cite this article:
Montezooma's Revenge Facts for Kids. Kiddle Encyclopedia.