Kids Encyclopedia Facts
Not to be confused with Battle of Montgomery's Tavern. 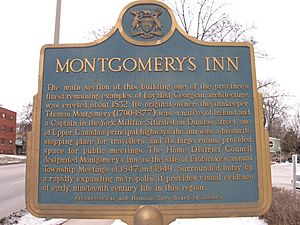 A plaque erected by the province of Ontario calls attention to the Inn.

Montgomery's Inn is a museum in Etobicoke, Toronto, Ontario. Built in 1830 as a Georgian-style inn, it was named for its innkeeper, Thomas Montgomery (1790-1877). The inn ceased operations in 1856 and continued as a private farm house that was rented to tenant farmers by the Montgomery family until 1946. It was later owned by a Presbyterian church, a developer, the Etobicoke Historical Society, and the Etobicoke Historical Board, until it was finally transferred to the City of Toronto. Once in danger of demolition, it is a cherished remnant of colonial times in Upper Canada. Though most of its current artifacts are not original to the building, they are period pieces, and a few belonged to the Montgomery family.

A year-round farmers' market is held each Wednesday at the Inn.

All content from Kiddle encyclopedia articles (including the article images and facts) can be freely used under Attribution-ShareAlike license, unless stated otherwise. Cite this article:
Montgomery's Inn Facts for Kids. Kiddle Encyclopedia.