Kids Encyclopedia Facts
This page is about the former Dow Planetarium in central Montreal. For the current planetarium, see Rio Tinto Alcan Planetarium. 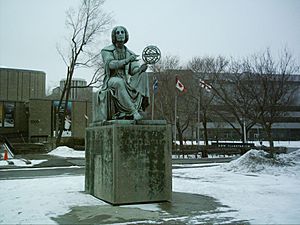 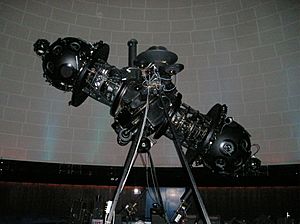 The planetarium was opened in advance of Expo 67 and inaugurated on April 1, 1966, by then-Montreal mayor Jean Drapeau. Its inaugural show, "New Skies for a New City", premiered on April 4, 1966. Work had commenced on the project more than three years before its launch, under the guidance of Dr. Pierre Gendron, a former professor of chemistry and founding Dean of the Faculty of Science at the University of Ottawa, who was an avid amateur astronomer. As president of the Board of Directors of Dow Breweries, Gendron convinced Dow to create a world-class planetarium in Montreal as part of the Canadian Centennial celebrations.

The architectural firm selected for the project was David-Barott-Boulva. The chosen design had an astronomical theme and the exterior of the dome resembled Saturn surrounded by its rings. The Planetarium was built at a cost of $1.2 million on the site of the historic Bonaventure Station on Chaboillez Square near Old Montreal.

The Planetarium produced more than 250 shows, was visited by nearly six million spectators and made more than 58,000 presentations in both French and English. The Planetarium was one of Montreal's most popular tourist attractions.

Closure of the Dow Planetarium

On October 10, 2011, the Dow Planetarium presented its final show. The city-owned building has since been ceded to the École de technologie supérieure, a major engineering school which is located nearby.

The Rio Tinto Alcan Planetarium opened in April 2013 as the successor to the Montreal Planetarium. It is located near the Olympic Stadium and the Biodome. The new installation has two separate theatres as well as exhibits on space and astronomy. The building is certified LEED Platinum.

All content from Kiddle encyclopedia articles (including the article images and facts) can be freely used under Attribution-ShareAlike license, unless stated otherwise. Cite this article:
Montreal Planetarium Facts for Kids. Kiddle Encyclopedia.