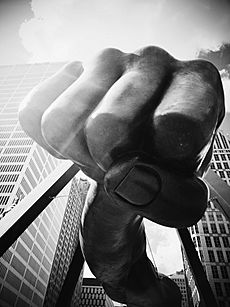 The Monument to Joe Louis, known also as The Fist, is a memorial located at Detroit's Hart Plaza, dedicated to boxer Joe Louis.

Dedicated on October 16, 1986, the sculpture, commissioned by Sports Illustrated magazine from the Mexican-American sculptor Robert Graham (1938–2008), and poured by the legendary bronze artist, Rolf Kriken, is a 24-foot-long (7.3 m) arm with a fisted hand suspended by a 24-foot-high (7.3 m) pyramidal framework.

It represents the power of his punch both inside and outside the ring. Because of Louis' efforts to fight Jim Crow laws, the fist was symbolically intended as a statement against racism. Graham referred to the sculpture as a "battering ram". It is claimed to be an historical metaphor, even down to its placement (pointing toward Canada).

The sculpture was vandalized by two white men in 2004, who covered it in white paint and left a sign which read, "Courtesy of Fighting Whities". Graham responded that the piece was "working" if it aroused passion.

All content from Kiddle encyclopedia articles (including the article images and facts) can be freely used under Attribution-ShareAlike license, unless stated otherwise. Cite this article:
Monument to Joe Louis Facts for Kids. Kiddle Encyclopedia.