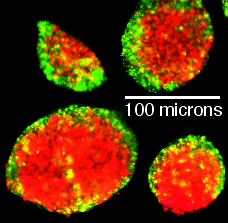 Morphogenesis (meaning the "beginning of shape"), is the biological process that causes an organism to develop its shape.

It is one of three fundamental aspects of developmental biology along with the control of cell growth and cellular differentiation.

The process controls the organized spatial distribution of cells during the embryonic development of an organism. Morphogenetic responses may be induced in organisms by hormones, by substances produced by other organisms, or by mechanical stresses induced by spatial patterning of the cells. Morphogenesis can take place in an embyro, a mature organism, in cell culture or inside tumor cell masses.

All content from Kiddle encyclopedia articles (including the article images and facts) can be freely used under Attribution-ShareAlike license, unless stated otherwise. Cite this article:
Morphogenesis Facts for Kids. Kiddle Encyclopedia.