Phyllocladus alpinus, the mountain toatoa or mountain celery pine, is a species of conifer in the family Podocarpaceae. It is found only in New Zealand. The form of this plant ranges from a shrub to a small tree of up to seven metres in height. This species is found in both the North and South Islands. An example occurrence of P. alpinus is within the understory of beech/podocarp forests in the north part of South Island, New Zealand.

The species contains the flavan-3-ols catechin, epicatechin and phylloflavan (ent-epicatechin-3-δ-(3,4-dihydroxyphenyl)-β-hydroxypentanoate). 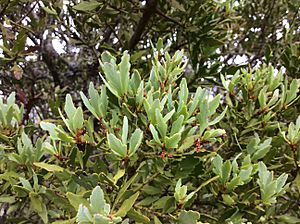 All content from Kiddle encyclopedia articles (including the article images and facts) can be freely used under Attribution-ShareAlike license, unless stated otherwise. Cite this article:
Mountain toatoa Facts for Kids. Kiddle Encyclopedia.