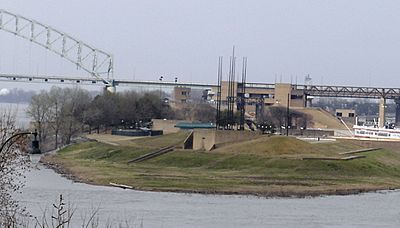 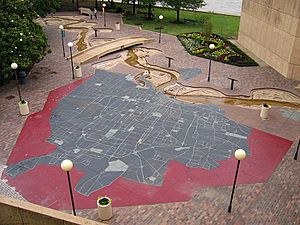 Mud Island (not actually an island) is a small peninsula, surrounded by the Mississippi River to the west and the Wolf River Harbor to the east. In 1960, the Wolf River was diverted so that it flows into the Mississippi River north of Mud Island. Mud Island River Park, located on the south end of the island, opened to the public in 1982. It is located within the Memphis city limits, 1.2 miles from the coast of downtown, and houses a museum, restaurants, and an amphitheater. It is accessible by the Memphis Suspension Railway (a monorail), by foot (via a footbridge located on top of the monorail), kayak, paddle board, or automobile.

The model empties into a "Gulf of Mexico" replica which was once a waterpark named Bud Boogie Beach, and on the other side is a small wooden boat named the Maymay which is no longer open to the public. Admission to the park is free. 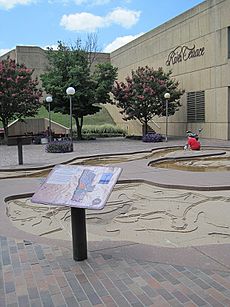 The Mississippi River Museum, on Mud Island, presents the history of the lower Mississippi river valley, with great emphasis on the steamboat, complete with a full-scale replica steamboat.

Mud Island is home to a 5,000 seat outdoor amphitheater which has been used for a summer concert series since it was built in 1982.

The band Dash Rip Rock, which has played there several times, recorded a song named Mud Island that can be found on two of their albums.

Wolf River Harbor was the lowermost channel of the Wolf River until 1960.

In 1959, the Memphis Downtown Airport was opened on Mud Island, which at that time was called City Island. The one-runway airport could be reached by a pontoon-boat ferry, made by Robert Ditto (principal of Kingsbury and Colonial Junior High), and was used mostly by businessmen and shoppers. The Downtown Airport was closed in 1970.

All content from Kiddle encyclopedia articles (including the article images and facts) can be freely used under Attribution-ShareAlike license, unless stated otherwise. Cite this article:
Mud Island, Memphis Facts for Kids. Kiddle Encyclopedia.