Kids Encyclopedia Facts
This page is about the headland. For the district in Swansea, see Mumbles (district). For the community, see Mumbles (community). For the American political figure known as "Mumbles", see Thomas Menino. 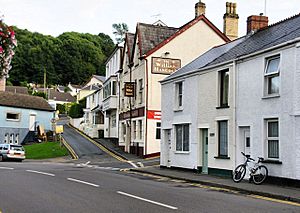 Mumbles (Welsh: Mwmbwls) is a headland sited on the western edge of Swansea Bay on the southern coast of Wales. The name Mumbles is also applied to the district encompassing the electoral wards of Oystermouth, Newton, West Cross, and Mayals.

The nearby pier was opened in 1898 at the terminus of the Swansea and Mumbles Railway, which in its time was one of the oldest passenger railways in the world. The railway closed in 1960.

A lifeboat station has operated from Mumbles since 1866. In 1947, the entire lifeboat crew was lost at sea, attempting to rescue the crew of the SS Samtampa, in what has become known as the Mumbles lifeboat disaster.

Panoramic photograph of Mumbles Pier; the Lifeboat station and the lighthouse on the right

All content from Kiddle encyclopedia articles (including the article images and facts) can be freely used under Attribution-ShareAlike license, unless stated otherwise. Cite this article:
Mumbles Facts for Kids. Kiddle Encyclopedia.