Museum of Food and Drink facts for kids 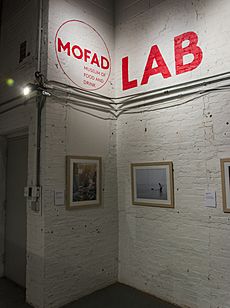 The Museum of Food and Drink (MOFAD) is a New York City educational non-profit and museum that seeks to change the way people think about food and drink. The museum's work explores "the ways food and beverage impact our culture, politics, economy, history, and more." It is located at 62 Bayard Street, Brooklyn in the Williamsburg section, opposite McCarren Park.

Dave Arnold founded and chartered the museum in 2005, but it remained an idea until 2011. In 2013, Arnold and museum Executive Director Peter Kim raised over $100,000 through a Kickstarter campaign for the museum's first exhibition.

The first exhibit, which debuted in New York in August 2013, was the result of the campaign: a 3,200 pound puffing machine, also called a puff gun. The puffing machine is part of a cereal-focused traveling exhibit.

In 2015, the museum gained the support of its first major sponsor, Infiniti, which helped fund a permanent space. That space became known as MOFAD Lab, a 5,000-square-foot gallery space in Williamsburg, Brooklyn. Chef Alex Guarnaschelli is the chair of the museum's Culinary Council.

Before the COVID-19 pandemic caused a shutdown of museums in New York City, MoFAD had announced a collaboration with The Africa Center for an exhibit entitled African/American: Making the Nation's Table.

All content from Kiddle encyclopedia articles (including the article images and facts) can be freely used under Attribution-ShareAlike license, unless stated otherwise. Cite this article:
Museum of Food and Drink Facts for Kids. Kiddle Encyclopedia.