The Museum of Health Care is located in Kingston, Ontario, Canada in the Ann Baillie Building on the Kingston General Hospital site and covers medical history from the 18th century to the modern era. Its research and collection are searchable on-line via their website and online catalogue.

The historic Ann Baillie Building is a 1904 Beaux-Arts style limestone structure and National Historic Site of Canada commemorating the history of nursing education in Canada.

Originally a dormitory, the Ann Baillie Building was designed by Kingston architect William Newlands to house 26 nursing students at the Kingston General Hospital's School of Nursing; its construction was supported by fundraising efforts by the Nurses Alumnae Association. While the first nursing students at Kingston General enrolled in 1886 and graduated in 1888 (the programme being lengthened to three years in 1905), originally nursing student accommodations were located within the hospital itself as quarters both overcrowded and at risk of contamination with infectious disease.

The School of Nursing closed in 1974, after the Ontario provincial government transferred the training of nurses to colleges and universities. As Queen's University constructed its own residence for nursing students, Waldron Tower, the original dormitory was vacated. The building was historically designated by the City of Kingston under the Ontario Heritage Act in 1994 and recognised to be of national historic significance by the Historic Sites and Monuments Board in 1997. 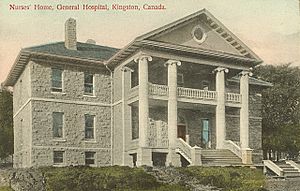 The original Ann Baillie Building from 1904 in Beaux-Art style.

"One of the earliest nurses' residences in Canada, this stately building symbolizes the development and recognition of nursing as a profession. The home was completed in 1904 for students at the Kingston General Hospital nursing school, who cared for patients in the wards and operating rooms as part of their training. The building was later named in honour of Ann Baillie, a graduate of the school and its superintendent from 1924 to 1942. Here as elsewhere, a place of their own helped nurses shape a professional role indispensable to health care within the hospital and the community."

The building currently houses the Coalition of Canadian Healthcare Museums and Archives as well as the Museum of Health Care.

In 1995, the Museum of Health Care was relocated to the Ann Baillie Building. It is the only museum in Canada dedicated to the history of health and health care.

One of the largest collections of medical and healthcare artefacts in Canada, the Museum of Health Care at Kingston is home to a wide range of artefacts and archival documents and photographs from surgical tools to laboratory instruments documenting how people have preserved health and managed disease, pain, and suffering from the late 18th century to the present day. The Museum strives to connect visitors with the experience of people in past times and provide context and perspective on contemporary health issues. The Museum serves the general public, practitioners, students, and historians through exhibitions, interpretive programs, and special events throughout the year.

First conceived in 1988 by founder James Low, the Museum of Health Care was born in 1991 when it began to build its collections of medical and general health objects and archives from across Canada. The Museum relocated to its permanent home in the former nursing-student residence at Kingston General Hospital in 1995. The Museum is a non-profit corporation and registered charity and has had a board of directors since 1996; it bills itself as Canada's only museum dedicated solely to preserving health care history. Dr. James Low, the Museum's administrative officer, was appointed to the Order of Canada in 2014.

Museum galleries are located both in the Ann Baillie Building and in a network of Outreach Galleries in healthcare centres in Kingston.

The Museum has an extensive collection of artifacts and archival documents, dating from the 18th century to the present. There are approximately 40,000 items in the artefact and archival collections.

The Museum's collections include a wide range of artefacts including medical, surgical, and laboratory instruments, commemorative objects, and patient care items. Some of the larger collections feature artefacts from the areas of anesthesiology, renal dialysis, orthopaedics, cardiology, patent medicines, nursing, and X-ray.

The Museum includes both on-site and off-site exhibits, focusing on the development of medicine and health care, in its operations. Also in operation, is a walking tour, created in partnership with the Kingston General Hospital, of the Kingston General Hospital National Historic Site of Canada. An on-line tour "From the Collection" of 30 profiles and a database of more than 30000 artefacts was added in 2011.

The Museum is affiliated with: CMA, CHIN, and Virtual Museum of Canada. The Museum has conducted special events for kids, including a one-day Teddy Bear Hospital in 2012.

Current details of the Museum's guided tours and education programs can be found on the Museum website.

All content from Kiddle encyclopedia articles (including the article images and facts) can be freely used under Attribution-ShareAlike license, unless stated otherwise. Cite this article:
Museum of Health Care Facts for Kids. Kiddle Encyclopedia.