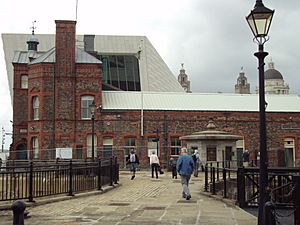 At the time of its closure on 4 June 2006, the museum had three galleries: City Lives explored Liverpool's cultural diversity, The River Room described life alongside the River Mersey and City Soldiers was an exhibition about the King's Regiment.

Previous exhibitions had been Mersey Culture, from Brookside to the Grand National, Making a Living and Demanding a Voice.

All content from Kiddle encyclopedia articles (including the article images and facts) can be freely used under Attribution-ShareAlike license, unless stated otherwise. Cite this article:
Museum of Liverpool Life Facts for Kids. Kiddle Encyclopedia.