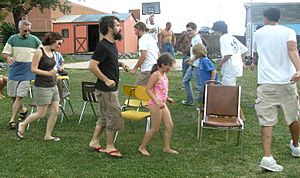 Musical chairs being played at a party

Musical chairs is a game of elimination involving players, chairs, and music, with one fewer chair than players. When the music stops whichever player fails to sit on a chair is eliminated, with a chair then being removed and the process repeated until only one player remains.

It is also a metaphor for pointless shuffling of personnel in a company; a fruitless, repeated scavenger hunt-like experience; and cyclic replacement of political leaders, as in multiple cabinet shuffles. 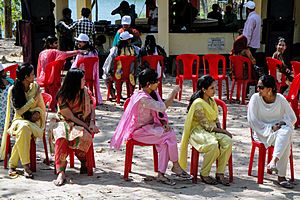 Musical chairs is a game where a number of chairs, one fewer than the number of players, are arranged facing outward with the players standing in a circle just outside the chairs. Usually music is played while the players in the circle walk in unison around the chairs. When the music stops each player attempts to sit down in one of the chairs. The player who is left without a chair is eliminated from the game. One chair is then removed/eliminated to ensure that there will always be one fewer chair than there are players. The music resumes and the cycle repeats until there is only one player left in the game, who is the winner.

"Musical chairs" has formerly been known as "Trip to Jerusalem" or "Going to Jerusalem"; this can also be the name of a game where there is only one stopping place, like a mat or rug, and the player who is on it or will pass over it next is out. Laura Lee Hope describes it under that name in chapter XIII of The Bobbsey Twins at School, as does John P. Marquand in Chapter XXXI of Wickford Point. 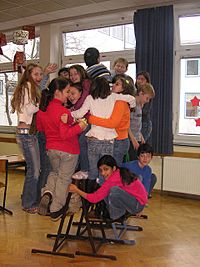 The end of a game of the all-inclusive version, in which everyone plays but nobody loses

In the all-inclusive version of "musical chairs" everyone plays but nobody loses, with one chair but no player eliminated each round until only one chair remains. All players have to "sit down" on the remaining chairs without their feet touching the floor.

A Cold Wind Blows is another non-competitive substitute for "musical chairs."

The modern term for this style of game is "Extreme Musical Chairs". Before the players sit down they must complete a task that the music person gives out before each round. For example before sitting in a chair, players must do five jumping jacks or run and touch the wall. Another variation is to have the players hop, jump, walk backwards, or dance while they are walking around the chairs.

All content from Kiddle encyclopedia articles (including the article images and facts) can be freely used under Attribution-ShareAlike license, unless stated otherwise. Cite this article:
Musical chairs Facts for Kids. Kiddle Encyclopedia.