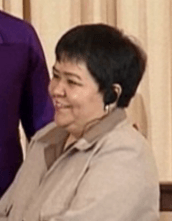 Mutabar Tadjibayeva (Uzbek: Mo'tabar Tojiboyeva) is a journalist and human rights activist from Uzbekistan. She started the “Fiery Hearts Club” NGO. She also started the Uzbek news website Jarayon. In 2009 she received the International Women of Courage Award.

In 2005, the international organization "Peace Women Across the Globe", part of the Nobel Committee, added Tadjibayeva’s name to the list of "1000 women peace activists". This made her a candidate for the Nobel Peace Prize.

Mutabar Tadjibayeva was on a top 10 list of women who worked for human rights.

For the 60th anniversary of the Universal Declaration of Human Rights, the Fiery Hearts Club received the "Liberty, Equality, Fraternity" Prize from France. Mutabar Tadjibayeva accepted the prize in Paris.

In March 2009, Tadjibayeva received the International Women of Courage Award from the U.S. State Department. Later she returned the award.

In 2011, Mutabar Tadjibayeva was on a list of ten most influential women in Central Asia.

All content from Kiddle encyclopedia articles (including the article images and facts) can be freely used under Attribution-ShareAlike license, unless stated otherwise. Cite this article:
Mutabar Tadjibayeva Facts for Kids. Kiddle Encyclopedia.