My Belarusy facts for kids 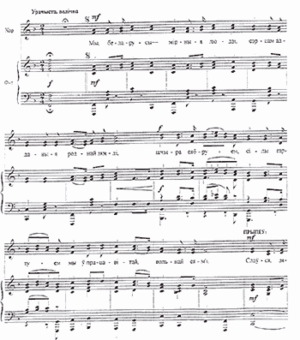 My Belarusy is the official national anthem of Belarus. The words of the anthem were created by two men, Uladzimir Karyzny and Maxim Klimkovich. The music for the anthem was created by Nyestar Sakalowski. A few of the words and the music for the anthem were used before when Belarus was joined with the Soviet Union. When Belarus became their own country in 1991, the music of the anthem was kept but the lyrics were never sung anymore. This changed in 2002 when the leader of Belarus, Alexander Lukashenko, made an official rule saying that the words by Karyzny and Klimkovich will be used when singing with the music. The words to the anthem are sung in the national language of Belarusian. The title of the anthem put to the English language is "We, the Belarusians."

The anthem is played for many events, including the announcing and closing of television programming, events where sports are played, the new leadership given permission to run the country and during national celebrations.

All content from Kiddle encyclopedia articles (including the article images and facts) can be freely used under Attribution-ShareAlike license, unless stated otherwise. Cite this article:
My Belarusy Facts for Kids. Kiddle Encyclopedia.