Nôm is a script formerly used in Vietnam. It involved the use of Chinese characters to write Vietnamese. The Van Ban bell, engraved in 1076, has the earliest known example of a Nôm inscription. The earliest surviving Nôm literature dates from the 13th century. The script was in common use until the 1920s. It was replaced by the Vietnamese alphabet. The Vietnamese alphabet is a form of the Latin alphabet.

Classical Chinese was used by the royal court and for other official purposes. The Temple of Literature in Hanoi was the best-known school for the study of Chinese. Students who passed the civil service examinations could go on to become magistrates. Confucian scholars saw Chinese as the language of education and looked down on Nôm, while popular opinion favored Nôm. Only a small percentage of the population was literate in any language, but nearly every village had at least one person who could read Nôm.

In Nôm, a Vietnamese word can be written using a Chinese character for a word with a similar meaning or pronunciation. Each character represents an idea. Such characters are called "ideographs." In addition, each character represents a syllable, or sound. Because traditional characters have this dual property, nearly every syllable in modern Vietnamese has acquired a semantic meaning. Like Chinese, Vietnamese is a tonal language. Since the issue of tone does not arise for Japanese or Korean, native phonetic scripts could develop for these languages without this complicating factor.

Sino-Vietnamese characters were eventually displaced by an alphabetic script. Unlike alphabets used elsewhere, the Vietnamese alphabet has marks to indicate tone. In contrast to South Korea and Japan, modern Vietnam does not require students to study the traditional characters. Fewer than 100 scholars worldwide can read Nôm. Vietnamese literature written in Nôm, including classics like Tale of Kieu and the poetry of Ho Xuan Huong, can now be read only in translation. However, character calligraphy remains popular as a home decoration and as a symbol of good luck. The Han-Nom Institute, founded in 1970, collects and studies relevant manuscripts. The Nôm Ideographs were added to Unicode in 2001. Unicode is an international electronic encoding standard.

Chinese characters are used to write various languages in China and elsewhere, including Mandarin, the most widely spoken language in China, Cantonese, spoken in Hong Kong and southern China, and Classical Chinese, traditionally used for formal writing. The characters were formerly used in Korea and in Vietnam. Japan uses a mix of Chinese characters and native phonetic script. Even characters that retain their original meaning in all languages may be read in various ways. The character 十 is given as shí in Chinese romanization (pinyin), jū in Japanese romanization (Hepburn), sip in Korean romanization (Revised Romanization), and thập in the Han-Viet system used in Vietnam. In all these languages, the meaning of the character is “ten.”

Modifiers normally come before the noun in Chinese, but follow the noun in vernacular Vietnamese. Chinese texts published in Vietnam often included a line-by-line translation into Nôm. Even when the same characters appear in both languages, the order is different. Many Chinese phrases gained currency as loan words. Later, the word order could be reversed to correspond to normal Vietnamese syntax. The word "Vietnam" is from Chinese Nányuè (南越), meaning “Southern Yue”. In Han-Viet, the same characters are read as Nam Việt. The word order was reversed in modern times. In Chinese, the phrase “Chinese characters” is written 漢字. This is romanized as hànzì in pinyin, kanji in Japanese, hanja in Korean, and Hán tự in Han-Viet. In modern Vietnamese, they are chữ Hán.

The majority of the characters used in Nôm are of Chinese origin and are composed phonosemantically. For example, the character "喃" is read as "Nôm", whose phonetic component "南" similar to the Cantonese pronunciation Naam4 and means “chattering.” This rule is consistent in all Chu Nôm characters as all Vietnamese made characters are composed using this method. The word "Nôm" does not have any negative connotation in Vietnamese, but rather suggests plain talk, something easy to understand.

Nôm includes thousands of characters not found in Chinese. In contrast, Japan developed only a few hundred kokuji, Korea just a handful of rarely used gukja. These characters were created by authors who combined pre-existing elements. One element, called the semantic component, indicates the character's meaning, either pictographically or ideographically. The other element, called the phonetic component, gives pronunciation. For example, the reading ba is indicated by the character 巴. In Mandarin, this character has the same pronunciation as in Vietnamese, but it's meaning is unrelated: "to long for." For the character 𠀧 (⿺巴三), the character 三 which means "three" is added as the semanic component. "Father" is also ba, but written as 爸 (⿱父巴). "Turtle" is con ba ba (昆蚆蚆; ⿰虫巴). Most Chinese characters were created by the same method. As the correspondence between sound and meaning is compounded in Vietnamese created characters than it is in Chinese characters, the same approach resulted in two distinctions between Nôm characters; chữ Nôm (字喃; native characters) and Hán Nôm (漢喃; Han characters). 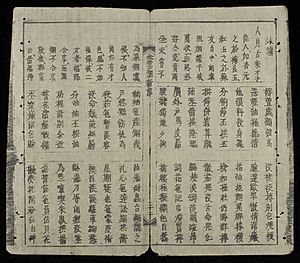 A page from The Tale of Kieu by Nguyen Du. This novel was first published in 1820, and it is the best-known work in Nôm. The edition shown was printed in the late 19th century.

Chinese characters were introduced to Vietnam after the Han Empire conquered the country in 111 BC. Independence was achieved in 939, but the Chinese writing system was adopted for official purposes in 1010. Vietnamese began to use Chinese characters to write in their own language at about this time. The Van Ban bell, engraved in 1076, is the earliest known example of a Nôm inscription. Nguyen Thuyen composed Nôm poetry in the 13th century. However, none of his work has survived. The oldest surviving Nôm text is the collected poetry of King Tran Nhan Tong, written in the 13th century. Many Nôm documents were destroyed by the Chinese during the Ming occupation of 1407-1428. Nguyen Trai (1380–1442) wrote both Chinese and Nôm literature in the 15th century. Trinh Thi Ngoc Truc, consort of King Le Than Tong, is credited with a 24,000-character bilingual Chinese-to-Vietnamese dictionary written in the 17th century.

Unlike Chinese, Nôm was not studied or classified systematically for most of its history. Vietnamese authors who had studied Chinese applied the principles of Chinese writing to their native language. Although official records were generally kept in Chinese, Nôm was used under two short-lived dynasties, the Ho dynasty (1400-1407) and the Tay Son (1778–1802). King Minh Mang (1820-1841) opposed literacy and the use of Nôm. In 1838, Jean-Louis Taberd wrote a Nôm dictionary that eventually gained general acceptance and wide circulation. In 1867, Catholic scholar Nguyen Truong To petitioned King Tu Duc to replace Classical Chinese with Nôm in official usage. The king did not consent to this, but he did respond with various efforts to promote Nôm. A decree was issued entitled "Please respect quốc âm [the national voice]."

In the 19th century, there was a flowering of popular literature written in Nôm, including such classics as Nguyen Du's The Tale of Kieu and the poetry of Ho Xuan Huong. Although only 3 to 5 percent of the population was literate, nearly every village had someone who could read Nôm aloud for the benefit of other villagers.

In Korea and Japan, the traditional writing system was simplified so it could be taught to the general public. Vietnam's educated class looked down on Nôm as inferior to Chinese, so it was not interested in doing the work required to simplify and standardize the system so that it could be used for mass communication.

Like Chinese, Vietnamese is a tonal language. It has nearly 5,000 distinct syllables, far more than other East Asian language do. Phonetic scripts used elsewhere, including hangul in Korea and kana in Japan, do not indicate tone, so they cannot be applied to the Vietnamese language. As in Chinese, a semantic meaning is attributed to every syllable. This characteristic of the language may be can considered a result of the traditional writing system.

The blue script is modern Vietnamese, while the characters in brown and green are Nôm. Characters that are also used in Chinese are shown in green, while those specific to Vietnam are in brown. It says, "My mother eats vegetarian food at the temple every Sunday."

Beginning in the late 19th century, the French colonial authorities promoted the use of the Vietnamese alphabet, which they viewed as a stepping stone toward learning French. Language reform in other Asian nations stimulated Vietnamese interest in the subject. Following the Russo-Japanese War of 1905, Japan was often cited as a model for Asian modernization. Nationalists embraced the alphabet as quốc ngữ (the national language), and as a tool for promoting literacy. The Confucian education system was compared unfavorably to the Japanese system of public education. Nationalist writer Phan Boi Chau encouraged the young to "study in the East," meaning Japan.

The popularity of Hanoi's short-lived Tonkin Free School suggested that broad reform was possible. In 1910, the colonial school system adopted a "Franco-Vietnamese curriculum," which emphasized French and alphabetic Vietnamese. The teaching of Sino-Vietnamese characters was discontinued in 1917. On December 28, 1918, King Khai Dinh declared that the traditional writing system no longer had official status. The civil service exam was given for the last time at the imperial capital of Hue on January 4, 1919. This exam tested knowledge of Chinese. The examination system, and the education system based on it, had been in effect for almost 900 years. China itself abandoned Classical Chinese soon afterward as part of the May Fourth Movement.

In the 1920s, the Vietnamese alphabet became the country’s dominant writing system. By the 1930s, the use of Sino-Vietnamese characters was largely restricted to books with limited woodbock printings intended for the Buddhist clergy. In more recent times, the traditional characters have been used mainly in calligraphy, such as wedding decorations. In 2012, manuscripts in Classical Chinese were translated to support Vietnam's claim to the Paracel Islands.

The following are the twenty five most common characters in Nôm literature. The modern spelling is given in italics.

Some characters in this article may require the installation of an additional font to display properly:

All content from Kiddle encyclopedia articles (including the article images and facts) can be freely used under Attribution-ShareAlike license, unless stated otherwise. Cite this article:
Nôm Facts for Kids. Kiddle Encyclopedia.