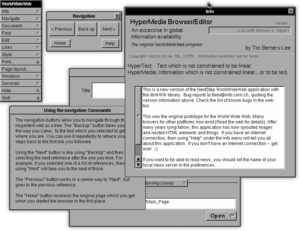 A WorldWideWeb Browser running on NEXTSTEP

NEXTSTEP was a computer operating system made by a company called NeXT. NeXT was run by Steve Jobs, who was the CEO of Apple until his death in 2011. NEXTSTEP was based on UNIX and used source code from BSD. It had a graphical user interface and it let people write computer programs using object-oriented programming. NEXTSTEP ran only on computers made by NeXT. Later on, NEXTSTEP was changed so that it could run on other computers. This new operating system was called OPENSTEP. In 1997, Apple bought the NeXT company and used NEXTSTEP to make Mac OS X.

All content from Kiddle encyclopedia articles (including the article images and facts) can be freely used under Attribution-ShareAlike license, unless stated otherwise. Cite this article:
NEXTSTEP Facts for Kids. Kiddle Encyclopedia.