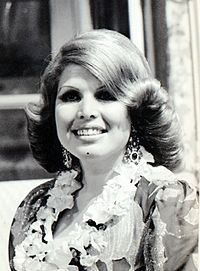 Naâma (Tunisian Arabic: نعمة) (27 February 1934 – 18 October 2020) was a Tunisian singer. She was named "Naâma" (meaning grace in Tunisian Arabic) by the Master Tunisian composer Salah Al Mahdi. Naâma became her stage name which she kept until she retired in late 1990s.

She was born in Azmour, in the North of Tunisia. Naâma died on 18 October 2020 after a long illness in Tunis, aged 86.

All content from Kiddle encyclopedia articles (including the article images and facts) can be freely used under Attribution-ShareAlike license, unless stated otherwise. Cite this article:
Naâma (singer) Facts for Kids. Kiddle Encyclopedia.