Nana Dzagnidze (Georgian: ნანა ძაგნიძე; born 1 January 1987) is a Georgian chess player. She was awarded the title of Grandmaster by FIDE in 2008. Dzagnidze was a member of the gold medal-winning Georgian team in the Women's Chess Olympiad in 2008 and European women's individual champion in 2017.

In September 2005 she took part in the sixth Lausanne Young Masters tournament, finishing seventh. Andrei Volokitin won the tournament. At the Gibraltar Chess Festival, Dzagnidze won the prize for the best female player in 2009 and 2011. 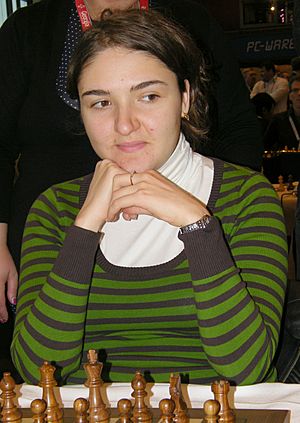 At the Dresden Olympiad

In July 2010 she won in Jermuk the fourth leg of the FIDE Women's Grand Prix series, which was part of the Women's World Chess Championship cycle for 2011. She won seven games and drew four, in the eleven-round round-robin tournament. She finished 1½ points ahead of second-place finisher Tatiana Kosintseva. 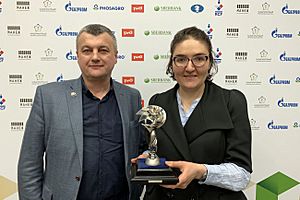 The winner of the honorary FIDE award of Caissa as the best female player of the year (2017). Chess Award of Caissa, designed and executed by artisans of the Lobortas Classic Jewelry House, was solemnly presented on December 31, 2018 during the closing ceremony of the 2018 World Rapid & Blitz Chess Championship in Saint Petersburg.

All content from Kiddle encyclopedia articles (including the article images and facts) can be freely used under Attribution-ShareAlike license, unless stated otherwise. Cite this article:
Nana Dzagnidze Facts for Kids. Kiddle Encyclopedia.