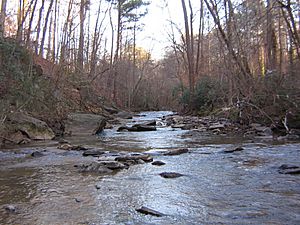 Nancy Creek is a 16.3-mile-long (26.2 km) stream in northern Atlanta, Georgia, United States. It begins in far northern DeKalb County, just north of Chamblee, and flows southwestward into Fulton County, through the far southeast corner of Sandy Springs, then through the Buckhead area of Atlanta. It empties into Peachtree Creek, which then flows into the Chattahoochee River, south of Vinings and Paces. The Chattahoochee eventually joins with the Flint River to create the Apalachicola River, which flows into the Gulf of Mexico. The North Fork Nancy Creek is a major tributary, while Little Nancy Creek tends to run low or dry. Other tributaries include Bubbling Creek which originates in Chamblee, Perimeter Creek which originates in Dunwoody and Silver Creek which includes the 38-acre Silver Lake and Little Silver Lake.

Especially due to excessive urbanization, Nancy Creek often floods. Prior to September 2009, the most recent was in July 2005, with it reaching 12.9 feet (3.9 m) after the outer rain bands of Hurricane Dennis passed by. This was just after Hurricane Cindy caused it to flood as well, though neither event was considered major.

Hurricane Ivan and Hurricane Frances caused record-high floods less than a year earlier in September 2004. Those massive rains caused a sewer pipe to collapse into the creek due to major erosion, spilling sewage into the creek. The creek reached 15.26 feet (4.65 m) late on September 16, its second-highest ever. While this only lasted a few hours, several residents had to be rescued and evacuated by boat.

Some of the worst flooding ever recorded on Nancy Creek occurred in September 2009 as a result of the 2009 Atlanta floods. It severely damaged the bridge at Peachtree Dunwoody Road, washing out the main center support beam. The bridge was closed for six months until an entirely new two-lane replacement bridge reopened on March 23, 2010. The Emergency Repair Program of the Federal Highway Administration funded 100% of the $1 million cost.

The best times of day and year for fishing in these areas are late spring to mid-fall in the afternoon to evening. During the winter, the fish of Nancy Creek are significantly less active due to the great drop in temperature of the water. Popular techniques for fishing in Nancy Creek include fly fishing, as well as fishing with a spinning outfit.

The origin of the name "Nancy Creek" is unclear. The name most likely honors a Native American Indian woman named Nancy.

All content from Kiddle encyclopedia articles (including the article images and facts) can be freely used under Attribution-ShareAlike license, unless stated otherwise. Cite this article:
Nancy Creek (Atlanta) Facts for Kids. Kiddle Encyclopedia.