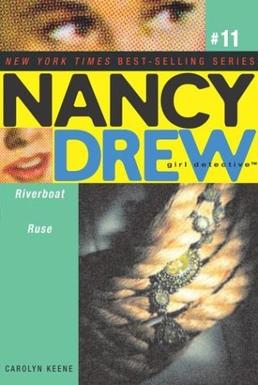 Nancy Drew: Girl Detective is a 2004-2012 book series which replaced the long-running Nancy Drew mystery series. This new series is written in first person narration, from Nancy's point of view, and features updated versions of the main Nancy Drew characters. New secondary characters are introduced to populate River Heights and appear over multiple books, adding a framework to Nancy's world.

Though this series has many improvements over the Nancy Drew Mystery Stories, the drastic change in the main characters' personalities was hard for many readers to accept. The series was negatively reviewed by many fans of the series, mainly over the change in Nancy's character. In 2008, the series was changed into a trilogy format, which gained even more negative reviews than before. Simon & Schuster cut back to 4 books a year in 2010, before low sales finally forced the cancellation of the Girl Detective series in 2011. In 2013, the Nancy Drew Diaries series was launched as the replacement for Girl Detective.

Books in the Nancy Drew: Girl Detective are released in paperback format by Simon & Schuster. From 2008 to 2012, the mysteries were presented as 3-book mini arcs, drawing the mystery out over three distinct, but linked, titles. The re-designed covers feature model Jessica Silverman as Nancy Drew.

Nancy Drew and the Clue Crew

Starting in 2006, Aladdin Paperbacks published a new series to replace the Nancy Drew Notebooks series for younger readers; it exists in the same universe as the Nancy Drew: Girl Detective series.

It features Nancy Drew, George Fayne, and Bess Marvin as eight-year-olds in the third grade at River Heights Elementary School, and solving kid sized mysteries, from finding a stolen ice cream formula entry to the culprit who cut the cake before the bride. This series also sets George's mother working her own catering company, and reveals George's real name to be Georgia. This series ended in 2015 to be replaced by the Nancy Drew Clue Book series.

A crossover spin-off series with The Hardy Boys: Undercover Brothers series. The stories are told in first person, alternating chapters, between Frank's or Joe's, and Nancy's perspective. The first title in the series acts as an introduction between the characters. This series published one title per year until the end of the Girl Detective and Undercover Brothers series in 2012.

Beginning in 2005, Papercutz began issuing a new series of Nancy Drew graphic novels as an offshoot of the Girl Detective series. The series is edited by Jim Salicrup, written by Stefan Petrucha, and illustrated by Sho Murase. All the storylines are completely new. The manga-style illustrations and technical allusions (Nancy's hybrid car, George's tablet PC) give Nancy and her friends a 21st-century spin.

There are several nods and tie-ins to other Nancy Drew media. In The Old Fashioned Mystery of The Haunted Dollhouse, the citizens of River Heights dresses up as if they were in the 1930s to celebrate an event. In Global Warming, Dr. Craven from Her Interactive's PC game The Creature of Kapu Cave appears. The Dana Girls and their friends appear in both High School Musical Mystery and High School Musical Mystery Part 2: The Lost Verse, initially as rivals to Nancy, though they eventually team up to solve the mystery.

In 2010, the series was rebooted as Nancy Drew: Girl Detective - The New Case Files. These new novels center around a River Heights that has become obsessed with vampire books. The third novel of this new series, Together with the Hardy Boys, featured a crossover with The Hardy Boys, who also had their own graphic novel series at that time. This ended up being the last issue, and the series was cancelled after that. In 2014, the series began being re-released as an offshoot of the new Nancy Drew Diaries series, containing two volumes per issue.

All content from Kiddle encyclopedia articles (including the article images and facts) can be freely used under Attribution-ShareAlike license, unless stated otherwise. Cite this article:
Nancy Drew: Girl Detective Facts for Kids. Kiddle Encyclopedia.