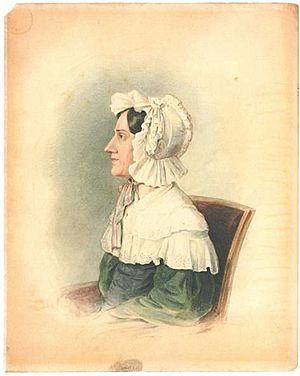 Nannette was a daughter of the organ and piano maker Johann Andreas Stein from Augsburg. Her father founded an important piano-making dynasty, and in 1790 Streicher took over father's business. In 1793 she married a musician Johann Andreas Streicher, and in 1794 they moved together to Vienna. In the beginning she had her brother Matthias Andreas Stein as a partner in the firm that was called Geschwister Stein. In 1802 siblings decided to go separate ways, and Streicher started inscribing her pianos Nannette Streicher née Stein in Wien. She was close to Ludwig van Beethoven and was helping him in household. The composer also had one of Streicher's pianos. After her death, their son Johann Baptist Streicher continued the firm.

All content from Kiddle encyclopedia articles (including the article images and facts) can be freely used under Attribution-ShareAlike license, unless stated otherwise. Cite this article:
Nannette Streicher Facts for Kids. Kiddle Encyclopedia.