The Nathaniel Wheeler Memorial Fountain is located in Bridgeport, Connecticut at the intersection of Fairfield and Park avenues. The fountain was built in 1912–1913 and was added to the National Register of Historic Places on April 4, 1985. The fountain consists of four elements: a central bronze figure of a mermaid holding aloft a lamp and rising out of a polished granite pool and three individually ornamented polished granite watering troughs at the angles of the triangular parcel of land raised above the street. The fountain was a mid-career work of American sculptor Gutzon Borglum. 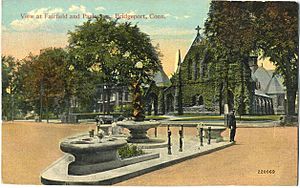 The fountain was erected in 1912–1913 as the gift of Nathaniel Wheeler's children to the city in memory of their father. Wheeler was a principal in Wheeler & Wilson, an early manufacturer of sewing machines. In addition to moving his factory to Bridgeport in 1856, Wheeler had been active in many city affairs, including plans to beautify the city.

The fountain underwent a $199,000 restoration in 2009–2010, in which vehicular damage was repaired and the flow of water was restored to the fountain among other refurbishments.

All content from Kiddle encyclopedia articles (including the article images and facts) can be freely used under Attribution-ShareAlike license, unless stated otherwise. Cite this article:
Nathaniel Wheeler Memorial Fountain Facts for Kids. Kiddle Encyclopedia.