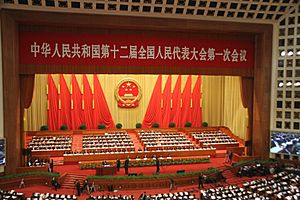 The Great Hall of the People, where the NPC convenes

The National People's Congress (usually abbreviated NPC) is the national legislature of the People's Republic of China. It had 2,987 members in 2013. It is the largest parliament in the world. Under China's current Constitution, the NPC is unicameral; it is not divided into a lower house and an upper house. It the power to legislate, to oversee the operations of the government, and the power to elect the major officers of state.

All content from Kiddle encyclopedia articles (including the article images and facts) can be freely used under Attribution-ShareAlike license, unless stated otherwise. Cite this article:
National People's Congress Facts for Kids. Kiddle Encyclopedia.