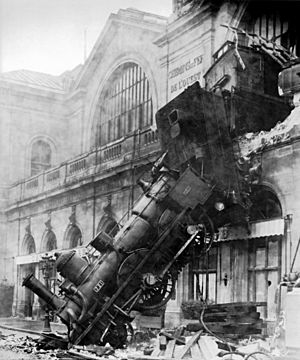 Negligence can lead to this sort of collision - a train wreck at Gare Montparnasse in 1895.

In law, negligence is a kind of lawsuit that people and organizations can bring if they are hurt. It is a kind of tort. The law calls someone negligent if he hurts someone else, or someone else's property, because he was not careful enough.

In some cases, the law tells people that they have special duties. In other cases, the law says that people have no duties at all. For example, in most places that use the common law, a person has no legal duty to rescue another person from harm, even if the rescue is very easy and does not cost anything or put anyone else in danger.

The case of Donoghue v Stevenson [1932] established the modern law of negligence, laying the foundations of the duty of care and the fault principle which, (through the Privy Council), have been adopted throughout the Commonwealth.

May Donoghue and her friend were in a café in Paisley. The friend bought Mrs Donoghue a ginger beer float. She drank some of the beer and later poured the remainder over her ice-cream and was horrified to see the decomposed remains of a snail exit the bottle. Donoghue suffered nervous shock and gastro-enteritis, but did not sue the cafe owner, instead suing the manufacturer, Stevenson.

The Scottish judge, Lord MacMillan, considered the case to fall within a new category of delict (the Scots law nearest equivalent of tort). The case proceeded to the House of Lords, where Lord Atkin interpreted the biblical ordinance to 'love thy neighbour' as a legal requirement to 'not harm thy neighbour.' He then went on to define neighbour as "persons who are so closely and directly affected by my act that I ought reasonably to have them in contemplation as being so affected when I am directing my mind to the acts or omissions that are called in question."

When people do not follow their duty, the law says that they breach their duty.

A plaintiff can usually bring a lawsuit only if he or she has been hurt, or has some other legal harm. The law tells people what kinds of injuries people can sue about.

A plaintiff can usually sue a defendant only if that defendant was the one who hurt the plaintiff. In many cases, it is easy to figure out who hurt someone. But sometimes people get hurt in ways that nobody expects. For example, a defendant might be driving while drunk, and he might hit an electric pole. The electric pole could fall down and cause a neighborhood to lose electric power. As a result, a person two miles away might trip and fall in the dark. The law will decide whether the drunk driver caused the person to trip and fall.

The word negligence is sometimes used outside the law in a similar way. It means that someone has not been careful enough.

All content from Kiddle encyclopedia articles (including the article images and facts) can be freely used under Attribution-ShareAlike license, unless stated otherwise. Cite this article:
Negligence Facts for Kids. Kiddle Encyclopedia.