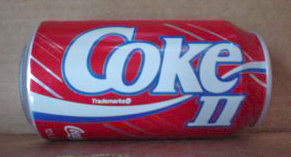 A can of Coke II

New Coke was a type of Coca-Cola that was sold from 1985 to 1992. Its flavor was sweeter then normal Coke. It was later sold as Coke II. Although it does not exist worldwide, it is still available today as Coca-cola C2. It is a product of the Coca-Cola Company.

All content from Kiddle encyclopedia articles (including the article images and facts) can be freely used under Attribution-ShareAlike license, unless stated otherwise. Cite this article:
New Coke Facts for Kids. Kiddle Encyclopedia.