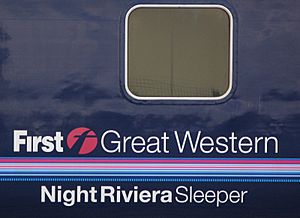 The Night Riviera is a sleeper train operated by First Great Western. It is one of only two sleeper trains on the railway in Great Britain (the other being the Caledonian Sleeper). It runs two trains per night, six days a week (Sun-Fri) between London Paddington and Penzance, with one train departing in each direction.

All content from Kiddle encyclopedia articles (including the article images and facts) can be freely used under Attribution-ShareAlike license, unless stated otherwise. Cite this article:
Night Riviera Facts for Kids. Kiddle Encyclopedia.