Nitro is a steel roller coaster located at Six Flags Great Adventure in Jackson Township, New Jersey. Manufactured by Bolliger & Mabillard, the Hyper Coaster model opened to the public on April 7, 2001. Since its debut, Nitro has consistently ranked high among steel coasters in the annual Golden Ticket Awards from Amusement Today, peaking in third place during its tenure. 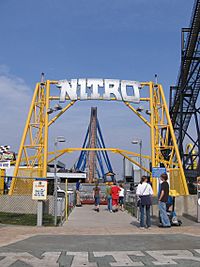 Nitro's queue area consists of an indoor and outdoor area followed by a long path before climbing the stairs into the station. Views from the line show the backside to Batman: The Ride and the Six Flags Great Adventure mechanical and storage area.

Nitro's station music is the remix of the Mortal Kombat theme, which can be heard during the queue and station.

After leaving the station, the train makes a left U-turn and ascends a 230-foot-tall (70 m) lift hill. After cresting the top, the train drops 215 feet (66 m) at a 68-degree angle, reaching a maximum speed of 80 mph (130 km/h). The train then ascends a 189-foot-tall (58 m) hill and dives down to the left, coasting over another large airtime hill. Afterwards, Nitro enters a unique B&M element known as a hammerhead turn, a tight U-turn, which veers to the right. Traveling over another camelback hill, Nitro enters its S-curve and into the 540-degree helix. After the mid course brake run, Nitro travels over three camelback hills, followed by a final brake run before returning to the station. 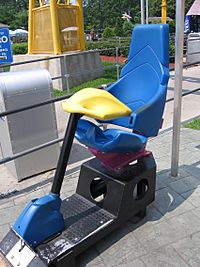 Nitro operates with three open-air steel and fiberglass trains with individual lap bar restraints. Each train has nine cars with riders arranged four across in a single row for a total of 36 riders per train.

Nitro's trains can be loaded and checked quickly, resulting in very high capacity with all 3 trains running. There are three main reasons for this:

The steel track is 5,394 feet (1,644 m) in length and the height of the lift is approximately 230 feet (70 m). It was manufactured by Clermont Steel Fabricators located in Batavia, Ohio. The track colors are pink and yellow, with blue supports.

Nitro currently has the second steepest drop of a lifted (as opposed to launched) roller coaster in the park, behind El Toro's 76 degree first drop. The coaster previously featured signs erected on the lift hill stairs which compared points on the hill to other tall structures, such as Niagara Falls; these signs were later removed.

All content from Kiddle encyclopedia articles (including the article images and facts) can be freely used under Attribution-ShareAlike license, unless stated otherwise. Cite this article:
Nitro (Six Flags Great Adventure) Facts for Kids. Kiddle Encyclopedia.