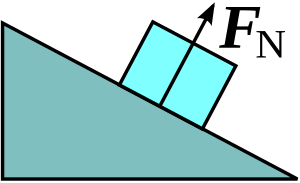 Normal force is the force that the ground (or any surface) pushes back up with. If there was no normal force, you'd be slowly seeping into the ground.

The normal force on a object is always perpendicular (at a right angle) to the surface the object is on.

On a flat surface, the normal force of an object is

(the object's weight, that is its mass multiplied by the force of gravity).

Note that on a flat surface,

would be 1. Thus, the two equations are equal.

All content from Kiddle encyclopedia articles (including the article images and facts) can be freely used under Attribution-ShareAlike license, unless stated otherwise. Cite this article:
Normal force Facts for Kids. Kiddle Encyclopedia.