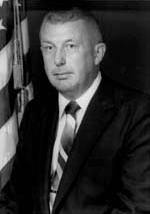 Norman Albert Carlson (August 10, 1933 – August 9, 2020) was an American correctional officer and politician. He was born in Sioux City, Iowa. He was made Director of the Federal Bureau of Prisons in 1970 by President Richard Nixon. He retired from the office in 1987. He was Director Emeritus of GEO Group.

Carlson died on August 9, 2020 at a hospital in Phoenix, Arizona from lymphoma, one day before his 87th birthday.

All content from Kiddle encyclopedia articles (including the article images and facts) can be freely used under Attribution-ShareAlike license, unless stated otherwise. Cite this article:
Norman Carlson Facts for Kids. Kiddle Encyclopedia.