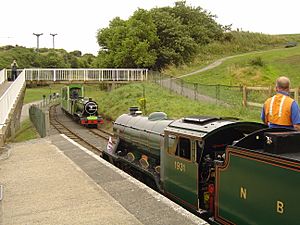 North Bay Railway (NBR) is a miniature railway or minimum-gauge railway in Scarborough, North Yorkshire, England. It was built in 1931, to the gauge of 1 ft 8 in (508 mm), and runs for approximately 7⁄8 mile (1.4 km) between Peasholm Park and Scalby Mills in the North Bay area of the town.

The opening ceremony took place at 2 p.m. on Saturday 23 May 1931. The locomotive, Neptune, was officially handed over by the Chairman of the North Side Development Committee, Alderman Whitehead, to the Mayor of Scarborough, Alderman J.W. Butler, for the Entertainments Department. Alderman Whitehead made a short presentation speech:
"On behalf of the National Union of Drivers, Engineers and others, I have to present you, the first driver of the North Bay Railway Engine, with your insignia of office, your oil can and your 'sweat rag'."
The mayor was presented with a peaked cap, an oil can (adorned with a blue ribbon), and a rag, before driving the train from Peasholm Station non-stop to Scalby Mills, at which point the engine was transferred to the other end of the train for the return journey.

During the Second World War, the railway was closed as it was in the Coastal Defence Area. The last train ran on 6 July 1940 and the railway remained closed until the Easter weekend 1945. The station nameboards at Peasholm and Scalby Mills, and the one on Peasholm signalbox were removed as security measures. The tunnel in Northstead Manor Gardens was used to store packing cases for the musical instruments belonging to the Royal Naval School of Music, which at that time was based in the Norbreck Hotel. 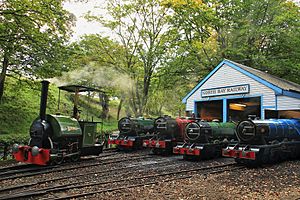 All the NBR engines, outside the shed, lined up for a photocharter event 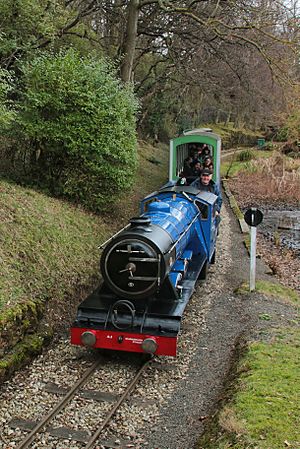 The four Diesel-Hydraulic locomotives are of common vintage and were constructed in the same works. The first two belong to Scarborough Borough Council, have operated on the North Bay Railway since construction, and are currently leased to the operating company. The other two locomotives are directly owned by the operating company and were originally built for the railway in Golden Acre Park in Leeds; after that line's closure they were used at Morecambe, Kilverstone and Great Woburn Safari Park. They were moved to the Cleethorpes Coast Light Railway for storage before being relocated to Scarborough in December 2006. In 2016 "Georgina", the railway's first steam locomotive, was completed and entered revenue-earning service over the Easter holiday; she is capable of hauling a loaded, five coach, train up the steep hill, to Scalby Mills Station. 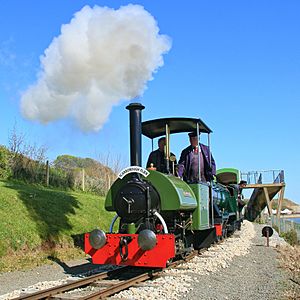 The railway was originally equipped (in 1931) with bogie passenger coaches, with more added to the fleet in 1932, all constructed by Robert Hudson Ltd of Leeds. All ten original coach frames are still in service, although their bodywork has been rebuilt several times over. In 1960 they were rebuilt as "toast-rack" type coaches, common to that era. In 1991 several vehicles were again rebuilt, and in 1998 all ten were rebodied in fibre-glass as "semi-open saloons", having roofs and partial sides, but no doors or windows, leaving the passenger with a mix of protection from inclement weather, and experience of open-air travel. Eight of these ten still operate today (as of 2010), whilst one has been stripped back to its underframe and is used as a service vehicle and another serves as a display at Scalby Mills. In 2007 two further coaches were added to the fleet. Using frames originally built in the early 1930s for the Golden Acre Park railway (Leeds) Rail Restorations North East Limited, of Shildon, constructed two fully enclosed saloon coaches, allowing bad weather transport of passengers in comfort.

There are also freight or service vehicles on the line including a bogie flat (converted from one of the original passenger coaches), a four-wheel hopper wagon, a bogie parcels van as a mobile P-Way store and mess and two four-wheel mine car frames serving as a boiler caddy and small flat wagon for P-Way tools. 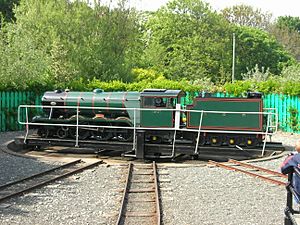 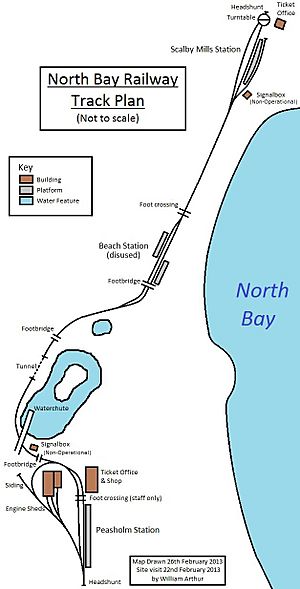 There are three stations on the line:

On 30 March 2007, operation of the line was formally taken over by the North Bay Railway Company Limited under the leadership of David Humphreys. Previously it had been owned and operated by Scarborough Borough Council.

A separate company, North Bay Railway Engineering Services was founded on 21 March 2013 in Burniston, to provide services to the railway. Founder David Humphreys was joined by Mark Ashton in 2014. In 2017 the company moved to Albert Hill in Darlington. The company specialises in new-build steam locomotives, but also provides a wide range of general engineering services for the North Bay Railway and other heritage railways in the UK. By May 2019, the company had completed three 2 ft (610 mm) gauge steam locomotives, and was working on several 7 1⁄4 in (184 mm) gauge miniature locomotives as well as a 3 ft (914 mm) gauge locomotive for the Southwold Railway.

All content from Kiddle encyclopedia articles (including the article images and facts) can be freely used under Attribution-ShareAlike license, unless stated otherwise. Cite this article:
North Bay Railway Facts for Kids. Kiddle Encyclopedia.