Waikāne or Waikane, also known as North Koʻolaupoko, is an area and census-designated place in the County of Honolulu, Hawaii, United States, on the island of Oʻahu. It had a population of 778 at the 2010 census. In Hawaiian, koʻolau poko means "short windward", referring to the fact that this is the shorter of the two windward districts on the island (Koʻolauloa or "long windward" is the other). Koʻolaupoko extends from Makapuʻu Point on the southeast to Kaʻōʻio Point on the north. Included within the district, south of North Koʻolaupoko, are the largest windward towns of Kāneʻohe, Kailua, and Waimānalo. 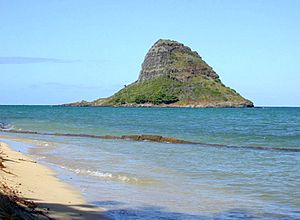 Waikāne lies mostly along the coastline of Kāneʻohe Bay and consists of several lush valleys that extend inland to the steep face of the Koʻolau pali (cliff). The first valley north of Kahaluʻu is Waiāhole. Next is Waikāne, then Hakipuʻu, and northernmost is Kualoa. This area differs from the towns, valleys, and ahupuaʻa of the southern part of Koʻolaupoko in that it is mostly undeveloped, decidedly rural in character, with many small farms.

Despite the long shoreline, public access to Kāneʻohe Bay is somewhat limited by private holdings. A small community park at Waiāhole was enlarged and improved in 2003. A larger city and county park at Kualoa provides camping and picnic areas, a long narrow beach, and views of Mokoliʻi Islet (Chinaman's Hat). The south side of Kualoa Regional Park faces onto Kāneʻohe Bay, and the east shore is a fringing reef off the Pacific Ocean coast of northeast Oʻahu.

There were 188 households, out of which 32.4% had children under the age of 18 living with them, 59.0% were married couples living together, 14.4% had a female householder with no husband present, and 16.5% were non-families. 11.2% of all households were made up of individuals, and 4.3% had someone living alone who was 65 years of age or older. The average household size was 3.86 and the average family size was 4.09.

All content from Kiddle encyclopedia articles (including the article images and facts) can be freely used under Attribution-ShareAlike license, unless stated otherwise. Cite this article:
North Koolaupoko, Hawaii Facts for Kids. Kiddle Encyclopedia.