Not in Front of the Children (TV series) facts for kids 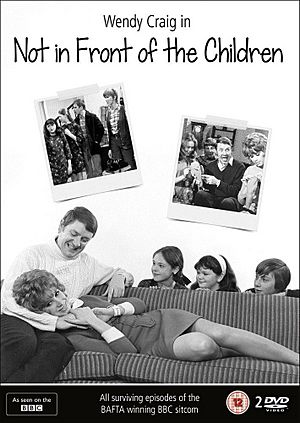 Not in Front of the Children is a British comedy series starring Wendy Craig. It was first aired on British TV in August, 1967. The last of the 39 episodes produced was transmitted on the 9th January, 1970. The programme was broadcast over four series or seasons. Wendy Craig went on to reprise her role as a middle class, scatty housewife in ...And Mother Makes Three and its follow up series ...And Mother Makes Five.

Craig plays a scatter-brain housewife, Jennifer Corner. She is married to Henry who is a school art teacher. They have three children, a boy in his early teens, played by Hugo Keith Johnston, and two girls who are younger than the boy, played by Roberta Tovey later replaced by Verina Greenlaw and Jill Roddick. Henry was initially played by Paul Daneman (in the Comedy Playhouse pilot and the first series or season). He was replaced in subsequent episodes by Ronald Hines. Jennifer's best friend, Mary, is played by Charlotte Mitchell.

All content from Kiddle encyclopedia articles (including the article images and facts) can be freely used under Attribution-ShareAlike license, unless stated otherwise. Cite this article:
Not in Front of the Children (TV series) Facts for Kids. Kiddle Encyclopedia.