An object in grammar is the target of an action, and occurs in any sentence with a transitive verb. It is an element in the clause which follows the verb, as in:

The cat sat on the mat.
She hit him.

The dog brought Jane his lead.
I sent my son a letter.

The structure of these sentences is (S/V/O/O) where S = subject, V = verb and O = object. The first object is an indirect object, the second is a direct object. Notice that, in the last example, you sent a letter, not your son. The sentence makes perfect sense without the indirect object.

An equivalent sentence to the last example is:

I sent a letter to my son.

Here some grammarians also see son as the indirect object (letter is the term which cannot be left out).

Objects are distinguished from subjects in the syntactic trees that represent sentence structure. The subject appears (as high or) higher in the syntactic structure than the object. The following trees of a dependency grammar illustrate the hierarchical positions of subjects and objects: 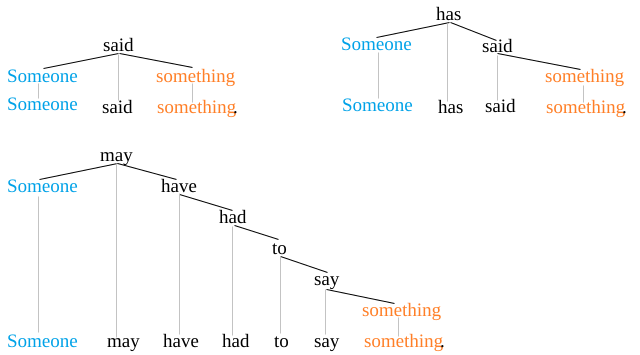 All content from Kiddle encyclopedia articles (including the article images and facts) can be freely used under Attribution-ShareAlike license, unless stated otherwise. Cite this article:
Object (grammar) Facts for Kids. Kiddle Encyclopedia.